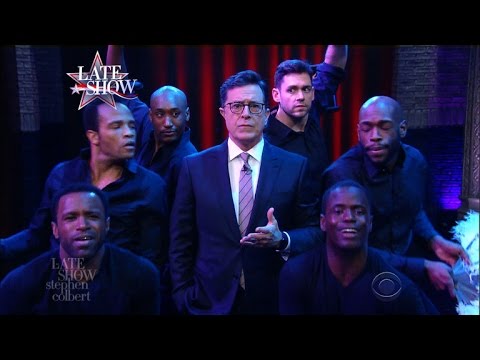 Top story this week is Mariah Carey’s baffling performance New Years Eve.  Now, Stephan Colbert began his show with this funny skit. He begins with saying that 2016 was rough and he’s staying positive in 2017.

He says, ” I blame the Russian hackers. Here’s the thing, I am on team Mariah here. This was not her fault. Mariah, you’re welcome to come on my show anytime. I’m sorry, there’s nothing in my prompter here.  Jim….. can you fix that? ….Jim? Who are you?  Mark?  Is this getting fixed? Ok, somebody?   Am I supposed to be singing right now?

The new year is starting off great for everyone except Mariah Carey, and our host.

Get the CBS app for iPhone & iPad! Click HERE: http://bit.ly/12rLxge

Get new episodes of shows you love across devices the next day, stream live TV, and watch full seasons of CBS fan favorites anytime, anywhere with CBS All Access. Try it free! http://bit.ly/1OQA29B

---
The Late Show with Stephen Colbert is the premier late night talk show on CBS, airing at 11:35pm EST, streaming online via CBS All Access, and delivered to the International Space Station on a USB drive taped to a weather balloon. Every night, viewers can expect: Comedy, humor, funny moments, witty interviews, celebrities, famous people, movie stars, bits, humorous celebrities doing bits, funny celebs, big group photos of every star from Hollywood, even the reclusive ones, plus also jokes.